A statistics report in 2015 revealed that almost every nine seconds, a woman is either assaulted or beaten in the United States. [2] However according to mankind statistics, two out of three domestic abuse victims are females while one is most definitely a male.[3] Then why is it so that not many speak about the one out of three abuse victims? Is it because they are males? Or is it because it is out of the ‘ordinary’ to do so?

Domestic abuse is not only physical but emotional abuse as well. Both physical and emotional abuse goes alongside one another.[4] It is very much unusual to find physical abuse without the existence of emotional abuse. Moreover, emotional abuse starts much earlier than physical abuse. The question is whether is it the same for both men and women? Indeed, it is. However, a small percentage of the population might agree or admit to that, due to how men are portrayed since evolution. Moreover, the movie industry has always portrayed men to be the more dominant and controlling individual. 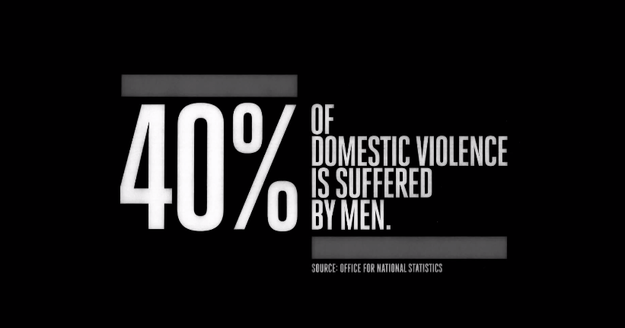 Men are always told to ‘act’ in a certain way. They are represented as the more dominant individual in any form of relationship. This makes it one of the main reasons as to why a number of domestic abuse cases on men go unreported. According to the guardian, reports revealed more than 40 per cent of domestic violence victims are surprisingly males.[6] Forty per cent is no doubt a large percentage of domestic abuse victims. Often domestic abuse cases against men go unnoticed due the extensive coverage on abuse against women and no or little coverage on abuse against men.

Parity, a campaign group which promotes equal rights for men and women claimed that neither the police nor the media takes male domestic abuse victims into much consideration.[7] Feminism is a hot topic in today’s day and era. However due to society’s norms, men are seem unable to fight for their rights as they are not ‘supposed’ to look weak. See the irony of it all?

There is more than one statistical report that states a higher percentage of women go through domestic abuse in comparison to men. However, according to Centres for Disease Control and Prevention statistics report, almost 5,365,000 men and 4,741,000 women were victims of domestic abuse in 2015.[8] The difference in both the numbers is apparent, yet often ignored or goes unnoticed. Only if these statistics were taken more seriously, there might be a decrease in the percentage and not an increase.

Men are often treated as ‘second-class victims’ when it comes to domestic abuse. [9] As mentioned earlier on, men are not taken seriously due to the society’s ‘standards’. A survey done in 2013 revealed that 95 per cent of reported domestic violence cases are of men abusing women and five per cent are of women abusing men. [10] However, what about the unreported ones? The issue of domestic abuse on men is a very taboo subject as men feel it would bring shame to their lives if they ever spoke about it.[11]

Men seem to feel reluctant to report domestic abuse as they would come upon as ‘unmanly’ and ‘weak’. They fear it might not only affect their personal lives but their professional lives too. People might either mock them or perhaps not take it seriously. Also, culturally it is tough for men to speak about domestic abuse against them to the authorities as it represents them as ‘frail’ individuals. Is it because, men are ‘supposed’ to be strong enough to walk away?

A male victim of domestic abuse who wished to remain anonymous told The Sun a British Newspaper, earlier in September about his personal experience on being abused by his girlfriend.

“She would often punch or slap me if we had simple disagreements and then would apologise and get very upset,” he said.

“It all came to a head one night in a bar when we had both had too much to drink.

“We got into an argument as we were leaving and she punched me in the face several times and broke my nose.

“Two guys came out of the pub and began attacking me.

“I was on the floor telling them that I was the victim but they didn’t stop kicking until she told them that she had hit me.

“The police were unwilling to help and I eventually dropped charges and ended our relationship.”

The fact that the victim was hit without being asked what actually happened, just proves the mindset the general public has of male domestic abuse victims. Moreover, this only shows how the authorities treat men when it comes to domestic abuse against them.

Furthermore, social experiments have been conducted where men were being hit by women in the public. The public’s reactions were appalling. Passersby laughed it off, and many took their smart phones out to record as it looked ‘funny’. When the exact experiment was done on women being hit, the reactions were totally different. People rushed to help the women within seconds. Sense the hypocrisy? I sure did, while watching the video below.

There are 7,500 female refugee places in England and Wales, but only 60 for males.[12] The difference is clear and astonishing; especially with the presence of human rights activists and social media. In today’s day and era, every other person is a citizen journalist, yet such issues are seldom brought to light.

Equal rights should indeed apply to both males and females. Domestic abuse can happen to anyone of any gender, so why the bias point of view? Domestic abuse against a man is just as repulsive as it is when the victim is a female. It is so very important for people to wake up and realise that each victim should be seen as an individual entity rather than basing them on their gender. Both should be provided with the same amount of help and none should be mocked.

Perhaps women are not the only voiceless individuals when it comes to domestic abuse. Men seem to be prominent in this regard as well, yet are being ignored. Having a voice yet feeling voiceless is a feeling that makes one feel dejected. Why not open our minds, to such possibilities and provide them with the same amount of support as we do with women?

It is time to voice these voiceless individuals.

MA, John G. Taylor. 2013. “Behind The Veil: Inside The Mind Of Men “That Abuse””. Psychology Today. https://www.psychologytoday.com/blog/the-reality-corner/201302/behind-the-veil-inside-the-mind-men-abuse.

Wooding, David. 2016. “Domestic Violence Against Men Soars To Record Levels As Number Of Cases Treble In Past Decade”. The Sun. https://www.thesun.co.uk/news/1802863/domestic-violence-against-men-soars-to-record-levels-as-number-of-cases-treble-in-past-decade/.

One thought on “Invisible Victims”